I've been pinning all these organization ideas on Pintrest.  I so need to incorporate them.  Sadly, I have pinned them, but not even looked at 90% of them.  Then I noticed my sister (whom I dragged into Pintrest) was actually USING the things she saw online.  It got me thinking more about ways to organize my house.  Yesterday I had an inspiring idea.  I was going to organize all the board games.  I went from this: 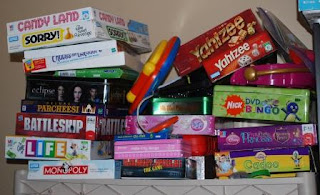 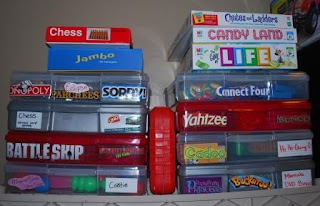 And in the second picture there are FIVE more board games and EIGHT more card games.
I purchased eight 12x12 paper keepers from Michaels (they came in a 4 pack - normally $30, but on sale for 50% off) and a few plastic 4x6 photo holders and some travel soap holders.  I'm using these to store some of the card games.  Right now I have many of the pieces in plastic bags.  I'm still trying to decide if I should get containers or leave them in bags.


Here are some pictures to show you what I'm talking about: 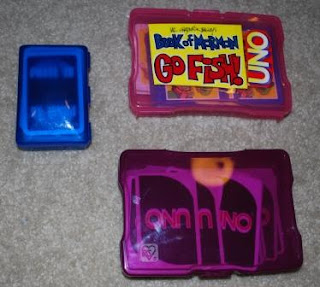 This one actually has two Uno games in it and there is plenty of room.  If you have just one package the soap dish would be your best bet. 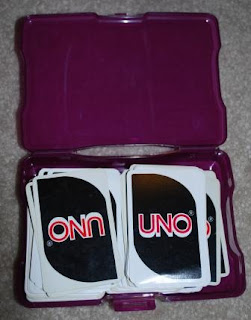 This one has two games in it as well.  An oversized Curios George Uno is on the bottom.  And a Go Fish game on the top.  Under the cards is instruction to Go Fish that wouldn't fit into the soap dish (but also works as a separator for the two games): 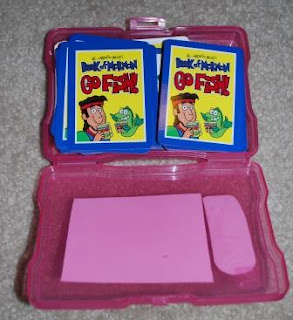 Here is Phase 10 in the soap dish: 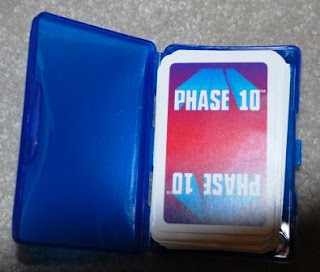 I have one more Uno game (think we have enough Uno cards?), Dice Game (Greed), and some regular playing cards that I need to pick up soap dish containers for.  Then my games should be organized.
FYI - I bought the 4x6 containers at Michaels.  They are $1.49, but are 40% off right now.  They are sold in the scrapbook organization aisle.  The soap dish you can get at Walmart or Target for $.99.
I arranged the games into the 12x12 containers just by the way they fit the best.  Since I was getting rid of the boxes I cut out their names.  I put the smaller names on the front and the bigger names on the top.  I just taped them on with packaging tape.  Some of the games already didn't have boxes anymore and some where in metal containers (all bent out of shape).  For these games we just wrote down their names and taped them on.
The five games pictured on top of the containers had game boards too long for the containers.  I was hoping would fit into a legal size hanging folder and I was going to file them away, but alas they are too long.  Hopefully their boxes won't be destroyed and they can sit nicely on top.  I also may purchase one more 12x12 container to put that red game into (pictured between the stacks of containers).  So if you like this idea you can go from this (plus 5 board games {Chess, Parcheesi, Chess, Jambo, Buckaroo}, lots of card games {Phase 10, Uno, Go Fish, Uno, Crazy 8's, Uno, Old Maid, and did I mention Uno?} and a dice game {Greed} and minus a toy laptop & art station):

Oh, and did I mention the 12x12 containers are made to stack so the won't just slide around like my games were before?  They should stay in two nicely stacked piles ~ until the kids forget to put them away :).
Linked to:
Tatertots and Jello
Posted by Wendy at 10:46 PM

Email ThisBlogThis!Share to TwitterShare to FacebookShare to Pinterest
Labels: Organization